The Rev. Mark Robarts, a college friend of his neighbor Lord Lufton, was as a young man presented with the comfortable living of Framley by his friend’s mother Lady Lufton, and soon married her protegee Fanny Monsell. Robarts, a genial, easy-going young clergyman, became acquainted with Nathaniel Sowerby of Chaldicotes the old Duke of Omnium’s MP from West Barsetshire. Although Mark knew that Sowerby was a gambler and a blackleg with whom Lord Lufton had already had unfortunate financial dealings, he accepted an invitation to Chaldicotes and to dinner at Gatherum Castle, the old Duke’s seat. While there, flattered by the attention shown him, he was induced to sign a note for £400, and later, when it became due, another for £500. The notes were soon in the hands of the Jews, but Sowerby made no attempt to pay them, placating Mark by securing for him a prebendal stall at Barchester Cathedral.

The old Duke, who held the mortgages on the Chaldicotes property, pressed for payment, and Sowerby made a half-hearted and ineffectual attempt to marry the wealthy patent medicine heiress Martha Dunstable as a means of extricating himself from his complicated financial difficulties. Miss Dunstable refused, but did buy up the mortgages, and after her marriage to Doctor Thorne made Chaldicotes her home.

After the death of Mark Robarts’ father, his young sister Lucy went to live at the parsonage, where she was cordially welcomed by Lady Lufton until it became apparent that Lord Lufton was attracted to her. Lady Lufton’s dearest plan was that her son should marry the stately Griselda Grantly, but the young lord refused and Griselda soon married the stupid but highly placed Lord Dumbello, When Lord Lufton. proposed to Lucy she would not accept him, knowing that such a marriage would be displeasing to her brother’s patroness, and declared that she would marry him only when Lady Lufton herself requested it.The resourcefulness and unselfishness with which she nursed Mrs. Crawley,  wife of a neighboring clergyman, through a serious illness completely won Lady Lufton’s admiration, and she drove over to Hogglestock to ask Lucy to marry her son. Mark, meantime, had been bedeviled by the moneylenders on account of the Sowerby notes, and it was only when the bailiffs were at the parsonage door, ready to take his belongings, that Lord Lufton bought up the notes and saved his friend from disgrace.

"...nothing is out of place in Framley Parsonage. Harold Smith's politics, Sowerby's rascalities, the social pleasures of the Chaldicotes set, the dinner-party of the Duke of Omnium, belong to the central themes as truly as the diseases and penury of the Crawleys or the ointment of Lebanon of Miss Dunstable."- Walpole

Millais reproduced from the serialisation of Framley Parsonage in the Cornhill Magazine January 1860 - April 1861. 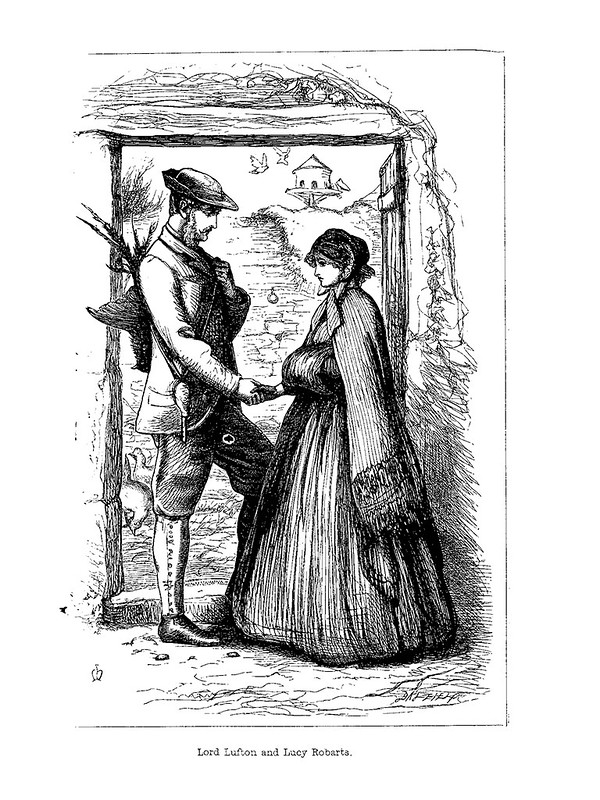 The story was thoroughly English. There was a little fox-hunting and a little tuft-hunting, some Christian virtue and some Christian cant. There was no heroism and no villainy. There was much Church, but more love-making.' - Anthony Trollope, An Autobiography