In my career, I have been lucky to have been asked to play two of Anthony Trollope’s fascinating women in the BBC productions of The Pallisers and The Barchester Chronicles. Although the two roles were very different, I have always thought that both the characters I played, Glencora Palliser and Signora Madeline Neroni, shared an ability to see through the facades of those around them and, when the right moment arose, knew precisely how to puncture the vanity of those who thought they were owed deference by all around them.

I have chosen this excerpt from Barchester Towers, which to my mind includes some of Trollope’s finest comedy scenes. It features Madeline getting the better of Mrs Proudie who normally intimidates everyone around her to get her way. Here, though, Madeline shows that she doesn’t care a jot for Mrs Proudie’s position and inflated opinion of her own importance and, when the chance comes, she seizes the opportunity to bring her down to size.

In fact, here, as in all her appearances throughout the novel, Madeline’s behaviour is an act, put on for the audience of admirers she gathers around herself. So it is that she recognises, with absolutely perfect comic timing, when to laugh at Mrs Proudie in her predicament. This then sets off everybody else, including, of course,us as readers, in laughing at the overbearing fifigure now brought low by the accident to her dress. It is a moment of true comic farce. Rarely, in all literature, can haughty pride have suffered such a humiliating fall.

The sofa had certainly been so placed that those who were behind it found great difficulty in getting out;–there was but a narrow gangway, which one person could stop. This was a bad arrangement, and one which Bertie thought it might be well to improve.

‘Take care, Madeline,’ said he; and turning to the fat rector, added, ‘Just help me with a slight push.’

The rector’s weight was resting on the sofa, and unwittingly lent all its impetus to accelerate and increase the motion which Bertie intentionally originated. The sofa rushed from its moorings, and ran half-way into the middle of the room. Mrs Proudie was standing with Mr Slope in front of the Signora, and had been trying to be condescending and sociable; but she was not in the very best of tempers; for she found that whenever she spoke to the lady, the lady replied by speaking to Mr Slope. Mr Slope was a favourite, no doubt; but Mrs Proudie had no idea of being less thought of than the chaplain. She was beginning to be stately, stiff, and offended, when unfortunately the castor of the sofa caught itself in her lace train, and carried away there is no saying how much of her garniture. Gathers were heard to go, stitches to crack, plaits to fly open, flounces were seen to fall, and breadths to expose themselves;–a long ruin of rent lace disfigured the carpet, and still clung to the vile wheel on which the sofa moved.

So, when a granite battery is raised, excellent to the eyes of warfaring men, is its strength and symmetry admired. It is the work of years. Its neat embrasures, its finished parapets, its casemated stories, show all the skill of modern science. But, anon, a small spark is applied to the treacherous fusee,–a cloud of dust arises to the heavens,–and then nothing is to be seen but dirt and dust and ugly fragments.

We know what was the wrath of Juno when her beauty was despised. We know to what storms of passion even celestial minds can yield. As Juno may have looked at Paris on Mount Ida, so did Mrs Proudie look on Ethelbert Stanhope when he pushed the leg of the sofa into her train.

‘Oh, you idiot, Bertie!’ said the Signora, seeing what had been done, and what were the consequences.

‘Idiot,’ re-echoed Mrs Proudie, as though the word were not half strong enough to express the required meaning; ‘I’ll let him know -;’ and then looking round to learn, at a glance, the worst, she saw that at present it behoved her to collect the scattered debris of her dress.

Bertie, when he saw what he had done, rushed over the sofa, and threw himself on one knee before the offended lady. His object, doubtless, was to liberate the torn lace from the castor; but he looked as though he were imploring pardon from a goddess.

‘Unhand it, sir!’ said Mrs Proudie. From what scrap of dramatic poetry she had extracted the word cannot be said; but it must have rested on her memory, and now seemed opportunely dignified for the occasion.

‘I’ll fly to the looms of the fairies to repair the damage, if you’ll only forgive me,’ said Ethelbert, still on his knees.

‘Unhand it, sir!’ said Mrs Proudie, with redoubled emphasis, and all but furious wrath. This allusion to the fairies was a direct mockery, and intended to turn her into ridicule. So at least it seemed to her. ‘Unhand it, sir!’ she almost screamed.

‘It’s not me; it’s the cursed sofa,’ said Bertie, looking imploringly in her face, and holding up both his hands to show that he was not touching her belongings, but still remaining on his knees.

Hereupon the Signora laughed; not loud, indeed, but yet audibly. And as the tigress bereft of her young will turn with equal anger on any within reach, so did Mrs Proudie turn upon her female guest.

‘Madam!’ she said,–and it is beyond the power of prose to tell of the fire that flashed from her eyes.

The Signora stared her full in the face for a moment, and then turning to her brother said, playfully, ‘Bertie, you idiot, get up.’

By this time the bishop, and Mr Slope, and her three daughters were around her, and had collected together the wide ruins of her magnificence. The girls fell into circular rank behind their mother, and thus following her and carrying out the fragments, they left the reception-rooms in a manner not altogether devoid of dignity. Mrs Proudie had to retire and re-array herself. 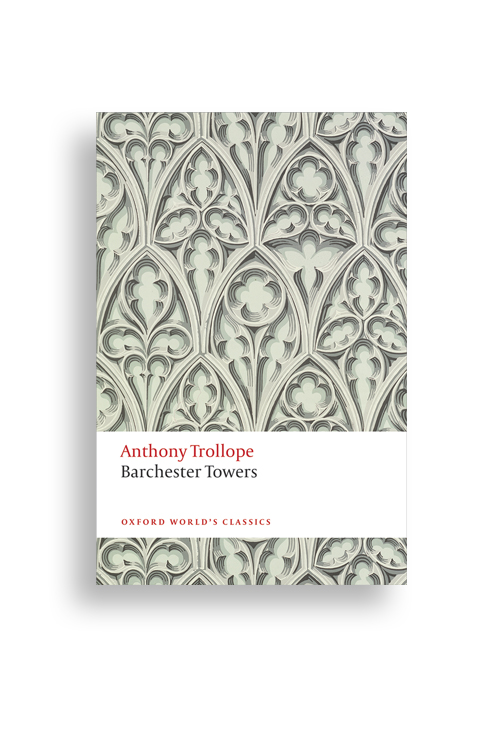 I have chosen this excerpt from Barchester Towers, which to my mind includes some of Trollope’s finest comedy scenes.