Selected by The Right Honourable The Lord Fellowes of West Stafford

I like this extract because, in the hands of a lesser writer, Mabel would come across as a calculating, hard and unsympathetic woman who has nearly tricked Silverbridge into marriage. But there is always a kind of mercy in Trollope’s work that makes him reluctant to judge anyone too harshly, and here he criticises the age they live in quite as much as he criticises her. In fact, the woman who is not-good-but-not-all-bad is a feature of his writing, among them Lady Onslow in The Claverings, Lady Mason in Orley Farm, of course, and here, Lady Mabel Grex, all of whom he treats with understanding, even while he reprimands them.

I would heartily recommend the longer, restored version of this novel, which makes far more sense of Trollope’s values, in much greater depth and detail, than the almost bowdlerised edition published at the time by the son of Charles Dickens. Once again, the author looks at the inequities of the class system, and the harshness of the judgments of his contemporaries, but always in a sympathetic manner. Lord Silverbridge is a nice young man, his father, the Duke, is moral and disciplined and upright, but Trollope teases his own characters about their positions and derives a lot of fun from them. The Duke’s views on the possibility of his gaining an American daughter-in-law, with its attendant horrors, are very gently depicted as absurd, and he takes much the same stance with the political figures who are part of the supporting cast. I suppose, in the end, I admire the way Trollope can demonstrate his piercingly accurate understanding of human motive, without ever quite abandoning kindness.

The Duke’s Children
Chapter 73 ~ I Have Never Loved You

“Yes; time,–that brings wrinkles and rouge pots and rheumatism. Though I have so hated those men as to be unable to endure them, still I want some man’s house, and his money, and his carriages,–some man’s bread and beef and wine,– some man’s jewels and titles and woods and parks and gardens;– if I can get them. Time can help a man in his sorrow. If he begins at forty to make speeches, or to win races, or to breed oxen, he can yet live a prosperous life. Time is but a poor consoler for a young woman who has to be married. You will see perhaps now, my friend, that I was not altogether indifferent to your position as an eldest son. But you have escaped.”

“And now let there be not a word more about it. I know–that I can trust you.”

“Though you will tell her everything else, you will not tell her this.”

“There will be something between us which will not be common to her. And surely you will not tell your sister!”

“It is because you are so true that I have dared to trust you. I had to justify myself,–and then to confess. Had I at that one moment taken you at your word, you would never have known anything of all this. ‘There is a tide in the affairs of men–!’ But I let the flood go by! I shall not see you again now before you are married, but come to me afterwards. Sometime, I dare say she and I may become friends.” Then he took his leave, almost without a word, and walked home, pondering what he had heard.

The Duke’s Children The Complete Text is published by Oxford World’s Classics in paperback in the UK on 22 October 2020 and in the US on 1 January 2021.

Vote for The Duke’s Children 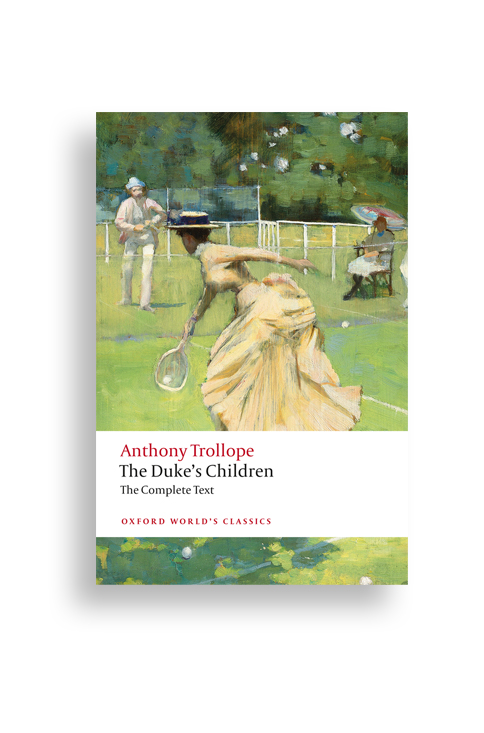 I would heartily recommend the longer, restored version of this novel, which makes far more sense of Trollope’s values, in much greater depth and detail, than the almost bowdlerised edition published at the time by the son of Charles Dickens.