Miss Mackenzie was published in 1865, by which time Trollope was well established as a very successful novelist. He says disarmingly in his autobiography, that it was a novel produced without any love, but, like a lot of the things he said about himself as a novelist, he didn’t really mean it. At all. He plainly adores Miss Mackenzie, who is about the only woman in the book that he doesn’t send up – and the sending up is remorseless.

When the book opens Miss Mackenzie is a classic Victorian spinster of 36, frugal, ignored, and at the mercy of a demanding family. She is described as being rather plain – too thin, Trollope says, and too tall, and regrettably big boned – but there is “a certain brightness in her grey eyes” and there is, also, her personality, which nobody in the Mackenzie family has ever given a thought to. For them, she was a nobody whose main purpose was to nurse first an old father and then a much older brother. She was, as so many Victorian women were, an unmarried female burden on the family, so she might as well make herself useful by way of earning (that is, in some way deserving) her bread.

So she nurses her unmarried brother Walter, whom she obeys as well as cares for. Her other brother, Tom, has married a woman who regards Margaret with the same dismissiveness that her brothers do. When Walter dies – he was unmarried and hard working – Margaret is astonished (so is Tom, and even more, so is Mrs Tom) to be the almost sole beneficiary of his Will, and finds herself suddenly an heiress, with £800 a year- over a million nowadays – to spend.

She not only has money, but she also, and in direct consequence, has suitors. Several of them in fact, all of whom are attracted by her wealth, which has had the immediate result of making her person strangely attractive. How have they not noticed how alluring she was before? Mrs Tom crossly says, “Of course, she will marry the first fool who asks her”. But she doesn’t. She goes instead to Bath (Trollope calls it Littlebath) taking with her Tom and Mrs Tom’s gawky fifteen year old daughter, Susanna, who plainly reminds her very much of herself at that age. She even goes so far as to turn down her widowed cousin, Sir John Ball, who says quite frankly to her that he can’t make her much of an offer as he is really just looking for a stepmother to his poor children. And anyway, his mother, Lady Ball, makes no secret of the fact that she has a very low opinion of Margaret Mackenzie. She says of her to her widowed son,“She’s not a beauty, eh, John? and she won’t set the Thames on fire”.

Littlebath is as interested in Miss Mackenzie’s wealth as London was, even if it is wrapped up in the loud Evangelism of the Stumfolds, who preside there. There are a few trustworthy new friends – Miss Baker is one – but Mr Maguire is not among them. He is a clergyman, very much a pet of Mrs Stumfold, and he seems at first glance, to fit Margaret’s increasingly romantic bill, being tall and possessed of good looks, a good figure and magnificent black hair. But – it is an insurmountable but in the end – he has a wall eye. A violently wall eye, never mind a deeply egregious manner. He is, in short, a creep, and he won’t do for Margaret.

It is one of Trollope’s many skills that his women are so real, so lively and fascinating, and his portrayal of them is so sympathetic. He was also very good at writing about sex, particularly female sensuality, and Margaret Mackenzie is a prime example. Freed by her money from the drudgery of her place in a Victorian household, Miss Mackenzie is at last able to please herself. And what she realises she wants is a man – a husband if you like – that she actually fancies. In the privacy of her own chamber she can at last gratify herself and her physical yearnings. Here she is, reflecting on her rejection of John Ball’s first offer, in front of her mirror:

Thinking of this during the long afternoon … she got up and looked at herself in the mirror. She moved up her hair from off her ears, knowing where she would find a few that were grey, and shaking her head, as though owning to herself that she was old; but as her fingers ran almost involuntarily across her locks, her touch told her that they were soft and silken; and she looked into her own eyes, and saw that they were bright; and her hand touched the outline of her cheek, and she knew that something of the fresh bloom of youth was still there; and her lips parted, and there were her white teeth; and there came a smile, and a dimple, and a slight purpose of laughter in her eye and then a tear. She pulled her scarf tighter across her bosom, feeling her own form, and then she leaned forward and kissed herself in the glass.

It is, if you consider it, an astonishing portrait of candid female desire, and especially astonishing for 1865. It is frank and open, but says so much by saying, in fact, so little. Margaret Mackenzie grows with the novel, and ends up as a considerable personality. The novel might not end quite the way it would end if it were written now, but for all that, she emerges as someone of real significance, an ornament to the man she eventually agrees to marry. And there are such wonderful treats on the way along, such as the shabby dreariness of Lady Ball’s sitting room in The Cedars, which Trollope describes as being “a pretty room had any care been taken to make anything pretty at The Cedars”. Then there is the joy of Mrs Tom’s dinner party, which is socially a disaster, with insufficient wine and iced puddings from the local pastry shop which taste of onions. And the bazaar …. lt is a wonderfully described bazaar, from the cause it benefits – The Orphans of Negro Soldiers – to the society ladies who participate. The Countess of Ware, a stout, square little woman, wore a tiara,“which gave her appearance a ferocity almost greater than was natural to her”.

Miss Mackenzie is available in the Trollope Society Complete Edition.
Price £30. Available to members only 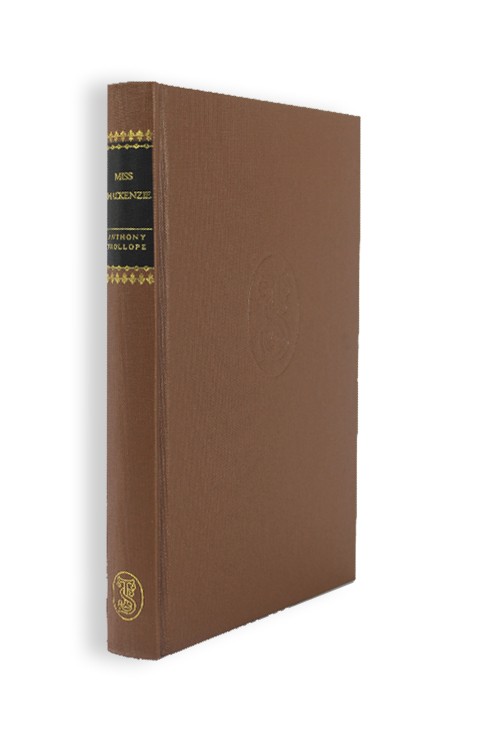