Chris Skilton is a member of the Trollope Society and a regular participant in the Online Conversaziones on Zoom. He has given talks on ‘Clergymen of the Victorian Church’ and Trollope’s short story ‘A Ride Across Palestine’ from the collection ‘Tales of All Countries’.

Chris Skilton is a former Archdeacon of Croydon and Archdeacon of Lambeth. He was educated at Magdalene College, Cambridge and ordained in 1981. After curacies at Ealing and Wimborne he became Team Vicar of St Paul’s Great Baddow. From 1995 to 2003 he was the Team Rector of Sanderstead.

Illustration: ‘Shewing How Wrath Began’ reproduced from the first edition published by Strahan and Co, London 1869, 2v by Marcus Stone 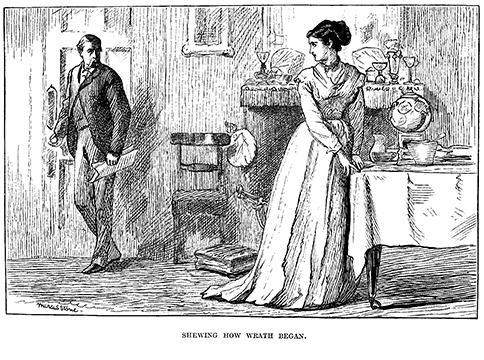 It is all very well for a man to talk about his name and his honour; but it is the woman's honour and the woman's name that are, in truth, placed in jeopardy.

He Knew He Was Right, Chapter XI, 'Lady Milborough as Ambassador'.