Going Back to Our Roots

Editor, Mark Green, looks back to the speeches from the first Annual
Dinner of the Society, reported in Issue 1 of Trollopiana.

Michael Williamson looks back at the celebrations this April to mark the Society’s thirtieth anniversary.

Steven Amarnick of the City University of New York led the team which over a ten year period reconstructed the full version of The Duke’s Children published in its complete form for the first time in 2015.

Mark Green who as well as editing Trollopiana also writes The Trollope Jupiter weekly blog where this article was originally published.

A collection of all sorts of things of interest to Trollopians 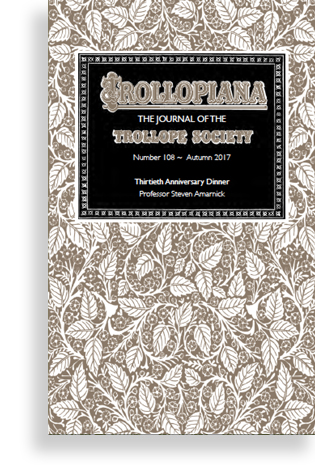 Feemy was a fine girl in the eyes of a man not too much accustomed to refinement.

The Macdermots of Ballycloran