The Small House at Allington

It is so hard to choose one particular favourite passage from the many novels of Anthony Trollope. Thanks to the Trollope Society, I have all his fiction and I have read every word – including some of those hunting episodes which, for me at least, can be pretty heavy going. To play the game, I have made my choice. The Small House at Allington is a perfect example of Trollope’s style and ploting. And Lily Dale, the heroine, is a perfect example of the many noble, spirited women who inhabit Trollope’s novels. Their goodness, integrity and readiness for self-sacrifice, sometimes by marrying, sometimes by not marrying, are in sharp contrast to Trollope’s feisty but flawed anti-heroines such as Lizzie Eustace.

In this extract from The Small House at Allington we find Lily Dale thrown over by Adolphus Crosbie in anticipation of a better financial outcome if he marries an Earl’s daughter.

Of course, as a Trollopian heroine Lily does not wait to be jilted but manages to seize the moral high ground by granting her false suitor his freedom before he screws up the courage to break off their understanding. Game, set (but sadly no match) to Lily Dale.

Naturally, Lily is broken-hearted, yet she carries on bravely despite the fact that she is in no mood to throw herself into the coming Christmas festivities. Her uncle and mother tentatively suggest she join the family up at her uncle’s house – ‘The Great House’ at Allington.

The Small House at Allington
Chapter 31 ~ The Wounded Fawn

“Of course we’ll go,” said Lily; “why not? We always do. And we’ll have blind-man’s-buff with all the Boyces, as we had last year, if uncle will ask them up.” But the Boyces were not asked up for that occasion.

But Lily, though she put on it all so brave a face, had much to suffer, and did, in truth, suffer greatly. If you, my reader, ever chanced to slip into the gutter on a wet day, did you not find that the sympathy of the bystanders was by far the severest part of your misfortune? Did you not declare to yourself that all might yet be well, if the people would only walk on and not look at you? And yet you cannot blame those who stood and pitied you; or, perhaps, essayed to rub you down, and assist you in the recovery of your bedaubed hat. You, yourself, if you see a man fall, cannot walk by as though nothing uncommon has happened to him. It was so with Lily. The people of Allington could not regard her with their ordinary eyes. They would look at her tenderly, knowing that she was a wounded fawn, and thus they aggravated the soreness of her wound. Old Mrs Hearn condoled with her, telling her that very likely she would be better off as she was. Lily would not lie about it in any way. “Mrs Hearn,” she said, “the subject is painful to me.” Mrs Hearn said no more about it, but on every meeting between them she looked the things she did not say. “Miss Lily!” said Hopkins one day, “Miss Lily!” – and as he looked up into her face a tear had almost formed in his old eye – “I knew what he was from the first. Oh, dear! Oh, dear! If I could have had him killed!” “Hopkins, how dare you?” said Lily. “If you speak to me again in such a way, I will tell my uncle.” She turned away from him; but immediately turned back again, and put out her little hand to him. “I beg your pardon,” she said. “I know how kind you are, and I love you for it.” And then she went away. “I’ll go after him yet and break the dirty neck of him,” said Hopkins to himself, as she walked down the path.

The novel concludes with a wedding where we see Lily at her best:

But no one at the wedding was so gay as Lily,—so gay, so bright, and so wedding-like. She flirted with the old earl till he declared that he would marry her himself. No one seeing her that evening, and knowing nothing of her immediate history, would have imagined that she herself had been cruelly jilted some six or eight months ago. And those who did know her could not imagine that what she then suffered had hit her so hard, that no recovery seemed possible for her. But though no recovery, as she herself believed, was possible for her—though she was as a man whose right arm had been taken from him in the battle, still all the world had not gone with that right arm. The bullet which had maimed her sorely had not touched her life, and she scorned to go about the world complaining either by word or look of the injury she had received. “Wives when they have lost their husbands still eat and laugh,” she said to herself, “and he is not dead like that.” So she resolved that she would be happy, and I here declare that she not only seemed to carry out her resolution, but that she did carry it out in very truth.

Vote for The Small House at Allington 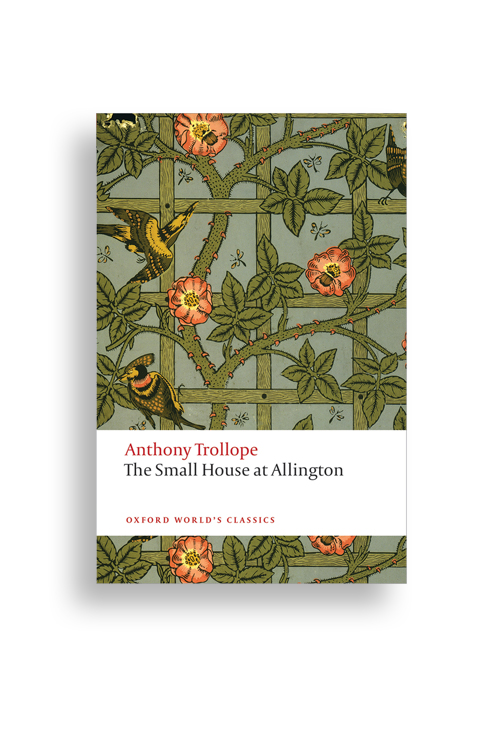 To play the game, I have made my choice. The Small House at Allington is a perfect example of Trollope’s style and ploting.