The NYC & Beyond Trollope Chapter, which meets via Zoom, has grown from its Greater New York City roots to include members from elsewhere in the U.S. and Britain.  The one hour conversation is always informative and spirited. At this next meeting they will discuss the novel Nina Balatka, which the group has agreed to read in advance.

The Trollope Society arranged a Trip to Prague in 2018. Michael Williamson, who was Chair of the Society at the time, identified the possible location of the Balatka house from the description given in the first chapter.

Balatka’s house stood in a small courtyard near to the river, but altogether hidden from it, somewhat to the right of the main street of the Kleinseite as you pass over the bridge. A lane, for it is little more, turning from the main street between the side walls of what were once two palaces, comes suddenly into a small square, and from a corner of this square there is an open stone archway leading into a court. In this court is the door, or doors, as I may say, of the house in which Balatka lived with his daughter Nina. Opposite to these two doors was the blind wall of another residence. Balatka’s house occupied two sides of the court, and no other window, therefore, besides his own looked either upon it or upon him.  … Immediately over the little square stood the palace of the Hradschin, the wide-spreading residence of the old kings of Bohemia, now the habitation of an ex-emperor of the House of Hapsburg, who must surely find the thousand chambers of the royal mansion all too wide a retreat for the use of his old age.

To express interest and learn more details about this event please complete the contact form.

Complete this form to register for the next meeting. The chapter administrator will contact you with the Zoom link. 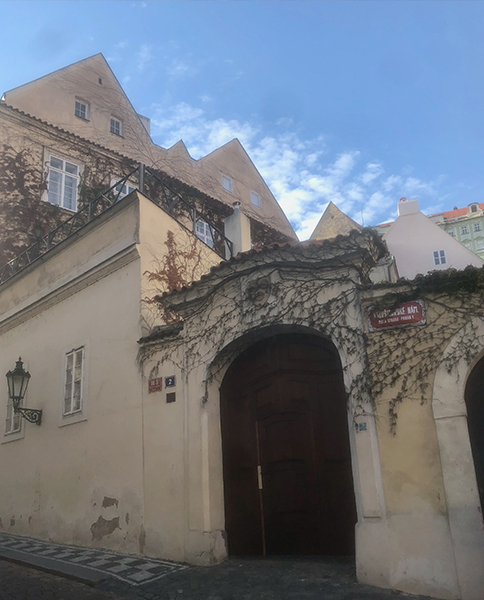 Nina Balatka was a maiden of Prague, born of Christian parents, and herself a Christian — but she loved a Jew; and this is her story.