The Eustace Diamonds was published in book form in October 1872 and appeared as a serial in The Fortnightly Review from July 1871 to February 1873. Throughout 2022 the Trollope Society will be celebrating the 150th anniversary of the publication of The Eustace Diamonds, including a dinner at the Reform Club on 28th July and an online Big Read of the novel from 13th June to 22nd August.

Members of the Trollope Society are invited to join members of the Reform Club’s Thackeray Society in celebrating the 150th anniversary of the publication of Anthony Trollope’s The Eustace Diamonds. The Thackeray Society is the arts and culture society of the Reform Club and we are honoured that they have extended an invitation to members of the Trollope Society to attend The Eustace Diamonds 150th Anniversary Dinner in July.

Join us in the magnificent surroundings of The Library at The Reform Club at 7.00pm on Thursday 28th July 2022 for a reception with wine and canapés, followed by a two course dinner, coffee and petit fours.

It was admitted by all her friends, and also by her enemies – who were in truth the more numerous and active body of the two – that Lizzie Greystock had done very well with herself.

Professor Helen Small regularly write essays about Victorian fiction, poetry, and public moralism, and has edited several well-known and less well-known nineteenth-century literary works, including Vanity Fair, Wuthering Heights, The Lifted Veil and Brother Jacob, The Eustace Diamonds, The Last Chronicle of Barset, and (with Stephen Wall) Little Dorrit. She is on the editorial board of the Journal of Victorian Culture and the advisory board of History of Humanities.

You must be a member of the Trollope Society to purchase tickets for The Eustace Diamonds 150th Anniversary Dinner. 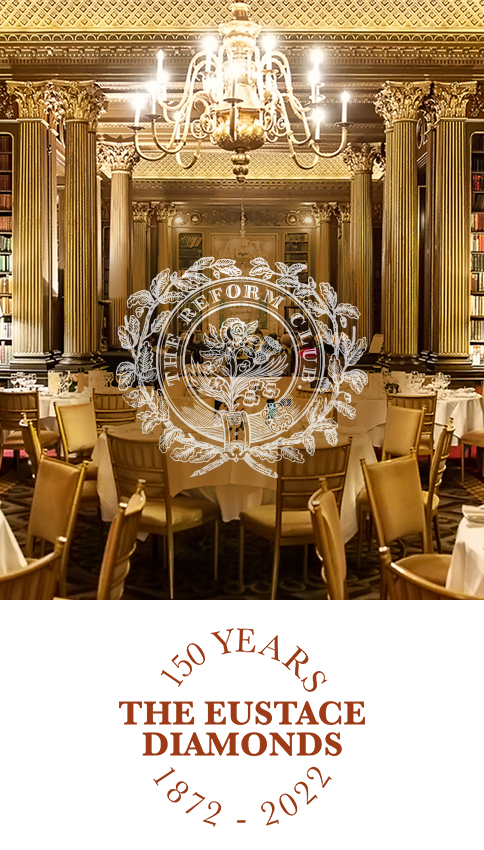 ... it would be rank theft, a theft almost as heinous as that of the Eustace Diamonds, if that reader were to be deprived of one jot or tittle of the pleasure and surprise which are in store for him if he choose to follow the fate of the famous necklace through these pages.