Join Christopher Briscoe for an illustrated talk on the (imaginary) history of Barchester cathedral.

Christopher Briscoe has been a fan of Anthony Trollope for more years than he cares to count. His love of the Barchester Series, was always tinged with sadness that Trollope never wrote one single word of actual physical description of his cathedral, despite all the wondrous tales he tells us of the shenanigans in the Close (with not a few in the Quire) and the torrid lives of the Barset clergy, nobility and gentry.  Neither is there a single word on the history of this wondrous historic edifice. As an architect and historian, Christopher thought this silence about the great church a deplorable oversight.  By this time, he thought he knew Anthony (as it seems members of the Society are now permitted to address the Master) quite well. He decided to design the cathedral and invent the history that Anthony would have given us had his prolific mind ever strayed in that direction. Everything in the novels implies that Barchester was one of the most ancient and beautiful of our great English cathedrals.  Christopher is therefore writing a sacred and profane account of the fourteen centuries through which this great Barset monument has evolved.

He decided that it all started with a Saxon Minster, founded and ruled by a royal princess, as was then very common.  As Anthony was so brilliant at describing young women, he would surely have plumped for that? There would be just a few tame male priests (under another roof!) to administer the sacraments. From this it would naturally have become monastic (as exactly half our mediaeval cathedrals were). Thanks to the beastly marauding Danes it would have been trashed and then re-founded as a Benedictine house for men alone around AD 1000, then raised to a cathedral around 1050 when that was all the rage, secularised by Henry the much-bedded, trashed again by the puritans and finally restored and re-vitalised through Victorian dynamism. There will even be an unscholarly peer into the Barset future. Christopher will attempt to elucidate the whole mediaeval and later history and development in an illustrated talk if you can join him by Zoom on 29 November.

Please note that you will not be able to join the meeting until 8.00pm (UK time) on the day. 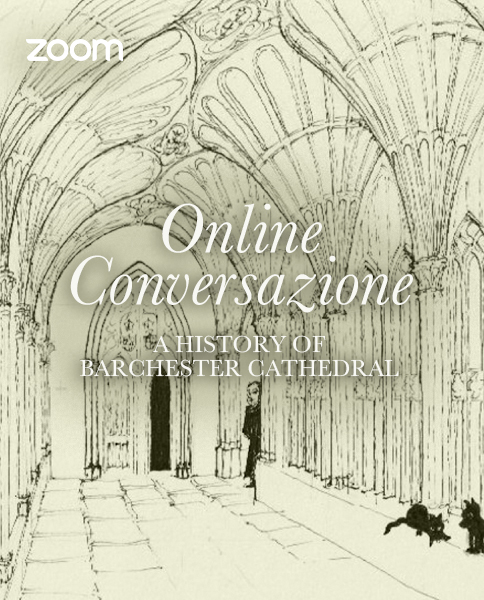 After many years inward debate, I decided that I would simply have to design the cathedral myself, invent its history and then write a sacred and profane account thereof.